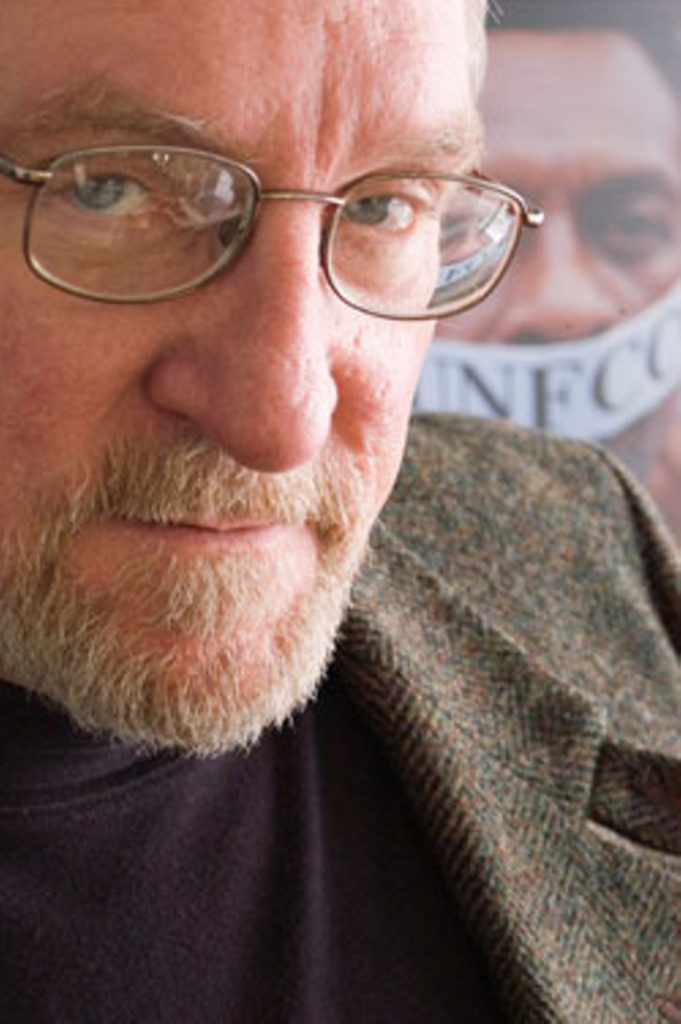 Ever wonder what it’s like to be arrested at the Republican National Convention? Challenge riot police outside a G8 economic conference? Activist Orin Langelle could tell you: The Hinesburg resident has been raising hell at high-profile international gatherings for years.
Better yet, though, Langelle could show you. Since the early 1970s, this veteran photojournalist has captured images of popular resistance — protests, marches, counter-demonstrations — for such mainstream rags as The New York Times and USA Today, as well as alternative ones like The Progressive and Vermont-based online zine Toward Freedom. In December, he documented the underside of the United Nations Framework Convention on Climate Change in Bali for Massachusetts-based Z Magazine.Langelle’s latest exhibit, “Corporate Globalization vs. Global Justice: Part II, The Struggle Continues,” is on view through April at Burlington’s Artpath Gallery. Six of his 38 photographs document popular struggle as witnessed in Bali. The rest are culled from records of such events as the 2004 Democratic and Republican conventions and the 2007 World Social Forum in Nairobi, Kenya.On a recent Saturday afternoon, Seven Days finds Langelle in his natural habitat: a World Social Forum-inspired protest march in Burlington. The march has been facilitated in part by the Hinesburg-based Global Justice Ecology Project, which Langelle co-directs with his wife Anne Petermann. “I was in Nairobi last year for the forum, and this year we decided to do it in communities,” he explains, standing with other protestors in a sunlit parking lot. “I’m excited to see people thinking of alternatives to the status quo.”This isn’t Langelle’s first local engagement. In the last decade or so, he orchestrated “militant direct action” during a Vermont meeting of the National Governors Association; turned Burlington into a “convergence center” for protestors en route to Québec for a Free Trade Area of the Americas summit; and waged a pressure campaign against former Governor Howard Dean’s forestry policies.

Today, however, Langelle is self-reflective. Rendezvousing with a reporter outside the University of Vermont’s Davis Center, he talks aesthetic principles: “I try to be as objective as I can, but I’m focused on people whose voices aren’t heard,” he says. “In this world, it’s very hard to get your message out. And with most [mainstream] press, it’s extremely hard.”

That philosophy of showcasing the underdog’s perspective informs his Artpath exhibit. In an image from the 2004 Republican National Convention in New York City, for example, Langelle captures a demonstrator getting arrested on Fifth Avenue. At a 2006 demonstration in Mexico, we see protestors abuse a police car. And, at the recent UN conference in Indonesia, an indigenous man poses with an official UN sign taped across his mouth — a comment, one presumes, on climate politics.

Langelle’s thematic largesse can work against his craft. With so much riot gear, barbed wire and police blockades spilling out of their frames, his images almost need to command a physical presence beyond their paltry 6-by-8-inch dimensions. The works seem particularly small in the context of this multi-artist Artpath show, in which Gerard Rinaldi’s poster-size “photodrawings” dominate the remaining exhibition space.

Back at UVM, Langelle scrambles atop a snow bank to capture an establishing shot while the marchers near the campus quadrangle. Click. A block later, he targets specific banners and people. “Health care is a human right,” declares one sign. “A child is more than a test score,” reads another. Click. Click.

“In terms of documenting, Orin likes to get as many different angles as possible,” explains Petermann from a nearby sidewalk. As she talks with a reporter, Langelle pauses at the intersection of South Williams and Main Streets, where a mother from Military Families Speak Out is blazing through the crosswalk. “When it’s an action, the idea is to be as in the middle of it as possible, but without getting arrested. And that,” Petermann adds, “is obviously a fine line.”

Suddenly, a black Audi full of aggressive college students speeds up North Willard Street, just missing some of the marchers. Langelle comes running. “The other role that Orin plays is to document conflict,” Petermann observes. “A car will think twice about running someone over if someone’s standing there with a camera.”

The threat dissipates, and Langelle joins his wife. “On the other hand,” she adds with a sly grin, “taking pictures can also make you a target.”

Has Langelle ever been roughed up for his pesky lens? “The only time I was ever clubbed was at the 1972 Republican National Convention,” he asserts as the crowd approaches Memorial Auditorium. “My first photo assignment ever, for the St. Louis Outlaw!”

“Yeah,” Petermann replies, “and you look more like a straight journalist than other people.”

Despite his rowdy inclinations, Langelle’s appearance isn’t particularly counter-cultural. True to his “objective” aspirations, he’s not carrying any incendiary paraphernalia. And his trim beard, blue ski jacket and thin-rimmed glasses lend a scholarly vibe; you could easily mistake him for a prep-school headmaster.

Like his outward features, however, many of Langelle’s photographs tell a more complex story. While some of his photos in “Corporate Globalization” are just what you’d expect them to be — “socially conscious” fodder for websites of righteous nonprofits — the best images aren’t merely political; they’re emotionally elusive. Langelle’s greatest weapon could be his capacity for spotting ironic nuance in places where you’d least expect it.

Consider Langelle’s photograph, “Rostock, Germany 2007,” in which a stoic female clown stands among six riot-ready policemen. Though funny, the image is also disarming — think Fellini’s La Strada, or whimsical silhouettes by contemporary artist and social critic Kara Walker. Viewing the print, we laugh, but feel a little guilty for doing so.

For a clue to Langelle’s inspiration, it helps to recall Henri Cartier-Bresson, the 20th-century French photographer who gravitated toward social-justice themes but also captured the world in its random, quotidian variety. In his writings, the Frenchman proposed that the camera should function as an extension of our visual impulses: “The eye cuts out the subject; and the camera simply has to do its job, that is to register upon film the decision of the eye.”

In his artist’s statement for “Corporate Globalization,” Langelle embraces Cartier-Bresson’s mantra, albeit on his own terms. “I attempt to capture what [Cartier-Bresson] describes as ‘the decisive moment,’” reads his Artpath blurb. But for Langelle, “that image should be of a social value that documents the underlying essence of the subject matter . . . I attempt to document the reality of injustice, much of which is linked with the struggle for the land: who controls it and for what it is used.”

“I come from the background of concerned photography,” Langelle asserts on a subsequent evening. It’s now a few weeks after the Burlington march, and the activist is holding court in a corner of his Hinesburg office. Days later, he and Petermann will ship off to Germany, via Rome, to attend a convention on biodiversity. “I did a series of photos because I want people to see,” he insists. “I’m trying to get people to look at what’s happening . . . with visual images.”

Still, Langelle’s art isn’t a slave to his politics. “Photography is the study of light,” he later asserts. “When I started studying photography, I didn’t just study photographers, I studied painters.” Asked to cite painterly influences, he mentions impressionism and Fauvism, then talks at length of the Dadaists —“a group of artists who broke away from the regular way of doing things.”

Wearing a ribbed red sweater, Langelle still looks anomalously professorial. “Plantations are not forests,” reads a sticker on the front door. “CLIMATE JUSTICE NOW!” declares a neighboring poster. “I’m mortified that art, at this time and age, has not taken more of a social responsibility,” Langelle says. “Because art is life, and I think it’s the responsibility of an artist to be . . . I mean, how many political art shows are there in Burlington? Not many. I don’t think they’re accepted.”

Back in the days of Dada, he says, art embodied a fierce rejection of World War I and the society that spawned a pointless conflict. Photographer and art patron Joseph Stiglitz was known for “his anarchistic thoughts, and for trying to show a political view of what was going on, that it wasn’t just pretty landscapes.

“I’m not saying that you shouldn’t have pretty landscapes, because there’s beauty all around,” he concedes after a pause. Langelle’s cheeks have reddened, and his face suggests some vague discomfort, as if he were suffering from a dull toothache. Beyond his window, car headlights drift along nearby Charlotte Road.